Geothermal energy is the natural heat of the earth and a truly international source of energy, available as an indigenous source of energy in all countries on earth (1). Geothermal energy can be harnessed both as a source of renewable electricity, and directly for heating and cooling applications. On a general level, the temperature increases 25 to 30 Celsius degrees for every kilometer underground. This thermal gradient is generated by the flow of heat from the interior of the earth, by the movement of continental plates or by the disintegration of radioactive elements in the crust (2).

It has been proposed to utilize geothermal systems as primary energy providers by 2050 (3). Thus, it has been recommended to focus on improvements to geothermal systems so that they can produce 100,000 MWe (megawatt electrical) of baseload power generation capacity by 2050 (3). Basically, it is proposed to pump water deep underground where the temperature is such that the generated steam would allow a turbine to operate on the surface to generate electricity with negligible CO2 emissions. These types of facilities will eventually require drilling to reach these geothermal reservoirs, see figure 1. The demands of the types of wells needed to exploit geothermal reservoirs will require improvements in drilling and well construction technology.

The development of enhanced/engineered geothermal systems (EGS) is one of the key challenges in the future of geothermal energy development (5). Before drilling and testing, geothermal energy resources require well understood geological systems, through geological, geochemical, and geophysical research (5). Figure 1 refers to the so-called Moho surface of discontinuity between the earth's crust and the mantle, which is commonly estimated by seismic or gravimetric methods (6).

EGS have been defined as "designed reservoirs that have been created to extract economical amounts of heat from geothermal resources of low permeability and/or porosity". EGS systems recover thermal energy from the subsurface by accessing existing and/or induced fractures or channels in the rock and circulating via wells, water from the surface through those channels. The injected water is heated by contact with hot rock in the subsurface and is brought to the surface through production wells (7). The grade of a specific geothermal resource would depend on its temperature-depth relationship (i.e., geothermal gradient), the reservoir rock’s permeability and porosity, and the amount of fluid saturation (3). 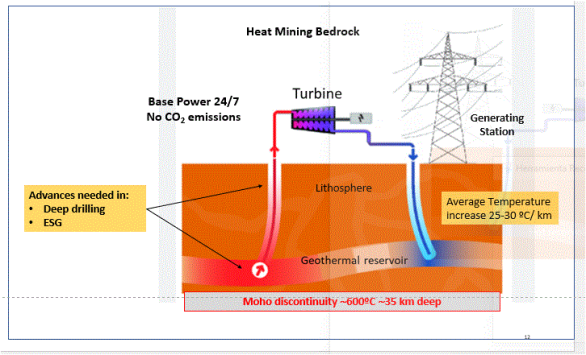 Figure 1.- Basic scheme of electricity production from geothermal energy by pumping water deep underground, where the temperature is such that allows the operation of a turbine on the surface, with zero CO2 emissions (4).

Geothermal energy using in the world

Archaeological evidence shows that the first human use of geothermal resources in North America occurred more than 10,000 years ago with the settlement of Paleo-Indians at hot springs (8). The springs served as a source of warmth and cleansing, and their minerals as a source of healing. However, it was only in 1904 that the first geothermal power plant was installed in Italy at Larderello, Tuscany (8). Italy remains as one of the main producers of geothermal energy in Europe and the world (9, 10) and, has an exploitable geothermal energy potential, estimated in the range of 5,800 and 116.000 Terawatt hours (TWh) of energy, compared to an annual demand of just over 300 TWh. In short, it would be enough to develop only a small fraction of the geothermal potential, to fully satisfy all domestic demand, especially since the quoted estimate only included the surface layer, less than five kilometers in depth (9).

Utilization of geothermal resources has expanded rapidly in Iceland during the last two decades, and it is expected to continue expanding in the future. Electricity generation increased from 5.0 TWh in 2016 to 6.0 TWh in 2020 equivalent to heat utilization going from 27.1 PJ in 2015 to 33.7 PJ in 2019, (PJ= Petajoule=1015 Joule). A population growth of 36% is expected by 2050, and geothermal utilization is estimated to increase by over 70% also by 2050, to almost 50 PJ. During the 20th century, Iceland has emerged from being a nation dependent upon imported oil and coal, to a country where practically all stationary energy, and close to 90% of primary energy, is derived from domestic renewable sources, with near carbon-free electricity production in 2020 (11). 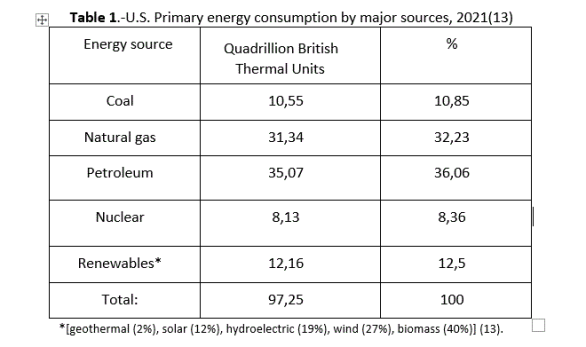 Drilling cost versus total costs of the geothermal power plant

Well costs are a significant economic component of any geothermal development project (3,14). In EGS power plants, estimates place drilling costs as accounting for 42%-95% of total power plant costs depending on the quality of the EGS reservoir (14). Drill-site specifics, stimulation approaches, well diameters and depths, and well production interval lengths and diameters are just some of the parameters that need to be considered. Insight into geothermal well costs is gained by examining trends from experience in the oil and gas well-drilling industry. Thousands of oil and gas wells are drilled each year in the world, and data on their costs are available on a yearly basis from the American Petroleum Institute’s Joint Association Survey (JAS) (3, 14).

In 2008, the DOE developed the first low-temperature geothermal unit in an oil field at the Rocky Mountain Oilfield Testing Center (RMOTC) in Wyoming (15).

Without a doubt, Oil and Gas (O&G) coproduction expands geothermal power possibilities (16). O&G industry today is in possession of thousands of established wells with known temperatures and flows which can be used for producing emissions-free and cost-competitive electricity using binary cycle units (17).

There are three types of geothermal power plants: dry steam, flash steam, and binary cycle (18). Dry steam plants use hydrothermal fluids that are already mostly steam, which is a relatively rare natural occurrence. The steam is drawn directly to a turbine, which drives a generator that produces electricity. After the steam condenses, it is frequently reinjected into the reservoir. Dry steam power plant systems are the oldest type of geothermal power plants, first used in Larderello, Italy, in 1904. Steam technology is still relevant today and is currently in use in northern California at The Geysers, the world's largest single source of geothermal power (18). Flash steam plants are the most common type of geothermal power plants in operation today. Fluids at temperatures greater than 182°C/360°F, pumped from deep underground, travel under high pressures to a low-pressure tank at the earth’s surface. The change in pressure causes some of the fluid to rapidly transform, or “flash,” into vapor. The vapor then drives a turbine, which drives a generator. If any liquid remains in the low-pressure tank, it can be “flashed” again in a second tank to extract even more energy. Binary-cycle geothermal power plants differ from dry steam and flash steam systems in that the geothermal reservoir fluids never get in contact with the power plant’s turbine units. Low-temperature (below 182°C/360°F) geothermal fluids pass through a heat exchanger with a secondary, or "binary," fluid. This binary fluid has a much lower boiling point than water, and the modest heat from the geothermal fluid causes it to flash to vapor, which then drives the turbines, spins the generators, and creates electricity (18).

Additionally, geothermal energy presents the risk of triggering earthquakes (19, 20). The drilling itself does not cause earthquakes, but the steam removal and water return can do so, by producing new instability along fault or fracture lines. This problem is more prevalent with enhanced geothermal power plants, which force water into the earth’s crust to open fissures to greater improve the exploitation of the resource. However, since most suitable geothermal sites would be away from population centers, the implications of these earthquakes are relatively minor (20).

To control the earthquake risk, operators aim at keeping the size of the fractures small and the water flow rates steady. The threshold goal for earthquakes is 2.0 or lower on the Richter scale. Such deep-drilling operations would not want a repeat of events in Basel, Switzerland, where a widely felt magnitude 3.4 quake in 2006 ultimately stopped a geothermal project (20).

Geothermal energy is an expensive resource to tap into, with price tags ranging from around $2-$7 million for a plant with a 1-megawatt capacity (19). However, the high upfront costs, can be recouped given the long project life.

Is geothermal a renewable energy source? This energy is available for use, alternatively it could be dissipated partially to the earth's crust through telluric movements. The energy released by an earthquake of a magnitude 5 on the Richter scale is equivalent to the energy freed by a 16 kilotons atomic bomb, equal to the bomb dropped on Hiroshima in August 1945 (21), with enormous destruction of lives and infrastructure. A question derived from this discussion is: will the massive use of geothermal energy lead to an overall reduction in earthquakes on the planet? This aspect is a subject of discussion and study. In any case, geothermal energy is considered an incredibly vast amount of thermal energy available in almost any part of the planet, which can be used without generation of greenhouse gases.

In relation to solar panels and their manufacturing, the International Energy Agency (IEA) points out that the world's manufacturing capacity for solar panels has shifted more and more from Europe, Japan, and the United States over the last decade to China, which has taken the lead in investment and innovation. China's share of all key stages of solar panel manufacturing exceeds 80% today, according to the report, and for key elements including polysilicon and wafers, it is expected to rise to more than 95% in the years to come, based on current manufacturing capacity under construction (22).

All energy sources are estimated to remain necessary through 2050. The Exxon-Mobil Outlook projects that oil and natural gas will account for 55% of the world’s energy mix in 2050, with renewables mostly displacing coal. Electricity demand will grow by more than 70%, with a decline in coalfired generation and increases from other sources (23). Geothermal provides a reliable source of energy as compared to other renewable resources such as wind and solar power. This is because the resource is always available to be tapped into, unlike wind or solar energy (19).

There is a great deal of work into geothermal energy now, meaning that new technologies are being created to improve the energy process. There are an increasing number of projects to improve and grow this area of industry. With this rapid evolution, some the current drawbacks of geothermal energy should be mitigated (19).

Over the last 20 years timeframe, the EU-27 average country’s energy dependence has increased from 56.3% to 57.5%, meaning EU members became slightly more reliant on energy imports over those two decades (24). Geothermal energy offers a primary energy source that could undoubtedly help reduce the dependence of the EU-27 on foreign energy sources.